Foodie Forecasting for the New Year

Foodie Forecasting for the New Year 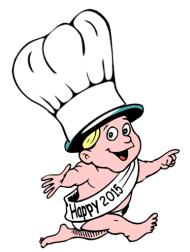 Is goat the new pork? Simoneink asked its culinary talents and beverage experts for their New Year predictions on the next big thing to hit the food and drink scene in 2015. Read on to see what they said in response to our single musing:

Moez Ben-Achour | Sommelier, Marcel’s [Washington, DC]
“Champagne. We are anticipating a huge comeback for Champagne in2015 – as the economy stabilizes and we return to the art of fine dining, there is no better way to celebrate and have a joyous experience than with a glass of good bubbly!”

Robert Wiedmaier | Chef / Owner, Marcel’s [Washington, DC]
“It’s all about fine dining. David Chang called it in his recent GQ article: ‘I love pork buns and fried chicken as much as the next guy, but there’s still no better restaurant experience in America than the holy French temples of haute cuisine.’ – Rock on!”

Jeff Tunks | Executive Chef / Co-Proprietor, Acadiana; Burger, Tap & Shake; DC Coast; District Commons; Penn Commons; Fuego Cocina y Tequileria; PassionFish [Washington, DC Area]
“Want to know what’s giving beef a run for its money? Goat. It’s already the most consumed red meat in the world and is now catching the eye of food savvy Americans. Its mild, lean flavor and versatility adapts to a myriad of flavors and spices and is one of our favorite proteins.”

Chris Clime | Executive Chef / Fish Monger, PassionFish [Reston, VA]
“it’s all about that bass, ’bout that bass. And it’s going to be swimming into 2015 as the new ‘it’ protein as the pork fad goes out with the tide. There is such an abundance, it can be sourced sustainably and taste-wise, there’s just no question.”

David Guas, Chef / Owner, Bayou Bakery, Coffee Bar & Eatery [Arlington, VA & Washington, DC] / Host, Travel Channel’s “American Grilled”
“We can’t have more restaurants without more permits! From the annual Bayou Gras Block Party at my restaurant in Arlington, VA on Fat Tuesday to the permitting involved in opening my second spot in DC this year – is all about perfecting your John Hancock and closing deals.”

Hillary Lewis | Founder, Lumi Juice [Charlottesville, VA]
“2015 is the year of no sugar! Let’s eliminate added sugars and appreciate the natural sweetness that comes from juicy organic fruits and nutrient packed vegetables – nothing can compare to the real thing!”

Steve McHugh | Chef / Owner, Cured [San Antonio, TX]
“The fermented vegetable. Thanks to DIY food activist and self-proclaimed “fermentation fetishist” Sandor Katz, the ancient, time-honored process has hit the mainstream. It’s essentially the curing of vegetables — anything from celery leaves to red squash — so bring it on!

Andy Nelson | Co-proprietor, Nelson’s Green Brier Distillery [Nashville, TN]
“World domination for American Whiskey! It has been growing as a category so quickly that producers cannot keep up with demand. Here’s to the next year of growth, one that we are excited to be a part of!”

Charlie Nelson | Co-proprietor, Nelson’s Green Brier Distillery [Nashville, TN]
“Collaboration. I sense that next year more people will be coming together to work on joint ventures and projects. We love working with small-batch breweries to create beers in our repurposed barrels. And in turn, we’ve found great success in aging our bourbon in Oloroso Sherry Casks – teamwork makes the dream work!”

Steven Marsella | Executive Chef, Heritage Grill [New Orleans, LA]
“Molecular mixology. New Orleans is such a cocktail city and I have a good feeling 2015 will elevate the game in terms of utilizing molecular methods in a glass. I’m looking forward to trying sangria with suspended fruit and drinks that change color as the ice melts!”

Chris Montero | Executive Chef, Café B and Café NOMA [New Orleans, LA]
“Oyster! As we enter the 10-year anniversary of Hurricane Katrina, we will celebrate the evolving rebirth of the city through the seafood we love most. Through Katrina and the Oil Spill, we have never lost faith in this quintessential element of the Gulf’s bounty and we will continue to honor it on our plates.”

Brett Gauthier | Executive Pastry Chef, Ralph Brennan’s Restaurant Group [New Orleans, LA]
“House made desserts. From the dough to the syrups and beyond, guests can see and taste the value of desserts made from scratch using quality seasonal ingredients – grandma would be proud!”

This entry was posted on December 22, 2014 by Simone in Uncategorized.