SIMONE SEZ: 50th Anniversary of the March on Washington

It takes courage to stand strong for who you are, for your passions, and for your determination to be an individual.  Let me tell you a story about standing strong.

I want to take you back 44 years ago: I remember being six years old (going on seven), and I was getting ready to throw the best birthday party of my childhood. It was to be a party at New Orleans Audubon Zoo on Monkey Hill, and all my Catholic school classmates from Academy of the Sacred Heart were invited—including the three little black gals, with whom I’d become friends.

Invitations went out, and my mom started receiving calls from other mothers: “My daughter will not come to the party if those three girls are coming.”

Even though I was young, I remember clearly my mother’s face in disbelief. I was not yet old enough to fully understand the opposition between races, but from that day on, I knew where my mother stood.

My mother replied to each of the ‘concerned’ mothers: “Well, I am sorry, but if you daughter cannot make it, that’s a shame. We will not be uninviting anyone.”

Ironically, all of ‘concerned’ mothers showed up with their daughters on the day of my birthday party. I remember my mother asking them to leave and pick their children up at the end of the party. She merely did not wish to socialize with those individuals who were so close-minded. I learned an important lesson from my mother that day—one that taught me to look beyond the color of skin, and to have no tolerance for intolerance. 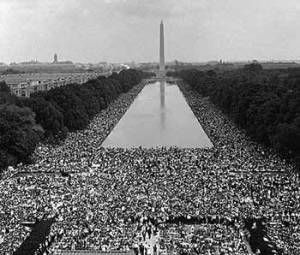 Here at the 50th Anniversary of the March on Washington, we see much progress in the name of equality, yet still a long ways to go. August 28th is a day in which one word carries the torch: freedom. It is a day I honor—a day in which the loudest voices were from the people’s hearts, screaming to be heard.

A world in which everyone had the same thoughts, beliefs, and customs would be a monotone world, and at any rate, unrealistic. What we’re working towards is a world in which the various cultures, races, religions, genders, sexual orientations, etc. can be respected and celebrated. Like I said, a long way to go, but I think Dr. Martin Luther King Jr. would be proud of the progress we’ve made.

I’m looking forward to the day’s events! For more information, check out this website for the 50th Anniversary of the March on Washington.

I’m Simone. And this is what simone sez…